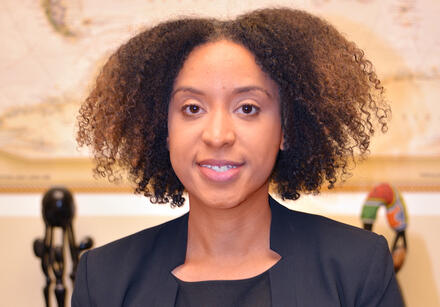 Janette Yarwood will join Yale’s Office of International Affairs (OIA) as the Director for Africa and the Middle East on June 27. Prior to joining Yale, she held several roles in Washington D.C. working on U.S. policy toward Africa.

Most recently, Yarwood was Senior Advisor to the Assistant Secretary of African Affairs at the Department of State where she worked on strategic initiatives and policy priorities including contributing to the Biden-Harris administration’s U.S. strategy toward Africa, planning elements of the upcoming U.S. – Africa Leaders Summit, developing an African diaspora engagement strategy, and serving as a liaison to academic institutions and think tanks. In this role she also volunteered and deployed to Doha, Qatar to assist with the Afghanistan evacuation effort.

Previously, she was staff director of the House Subcommittee on Africa, Global Health, Global Human Rights, and International Organizations where she led a comprehensive foreign policy agenda. She also managed the Middle East portfolio during which time she spent a month in Israel and traveled to the West Bank and Jordan to gain a deeper understanding of the region. Yarwood was also Chair of Sub-Saharan Africa Area Studies at the Foreign Service Institute with the Department of State, responsible for all aspects of the program including developing the curriculum and training U.S. diplomats and other U.S. government personnel preparing for an overseas assignment in Africa or covering Africa from the United States. In 2019, she was recognized for her contributions to U.S. national security and foreign policy by The Diversity in National Security Network and New America.

Yarwood is a Fulbright scholar and holds a Ph.D. in cultural anthropology from the Graduate Center, City University of New York. Her areas of focus include foreign policy development, writing and negotiating federal legislation, oversight of federal programs, engaging with the diplomatic community, managing multi-stakeholder partnerships, international organizations, diaspora and community engagement, democratization and governance, human rights, youth-led movements including the Arab Spring, and the intersection between arts and activism. She teaches a graduate course on International Relations and Africa at the Elliot School of International Affairs at the George Washington University and serves as an expert on the United States Institute for Peace working group on the Sahel Senior Study Group.

At Yale, she will be building on OIA’s work to support the Yale Africa Initiative and outreach efforts in the Middle East including working with Yale faculty to help deepen Yale’s engagement in these regions, developing partnerships, supporting admissions recruitment, building alumni networks, and expanding press and social media coverage. She will be based in New Haven and will make regular trips to selected countries.

For more information about OIA, including contact information for Yarwood, please visit the Yale and the World website.