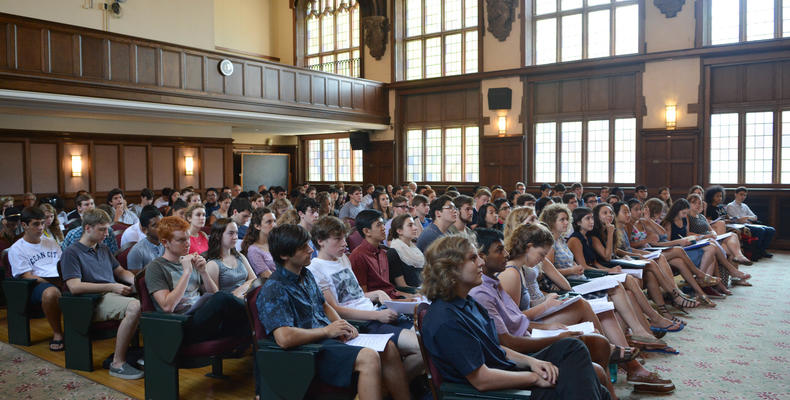 The Yale Office of International Affairs (OIA) is a university-wide resource that serves as the global liaison for all students, faculty, staff, and organizations involved in international activities and initiatives. Combining regional expertise with administrative capabilities, OIA fosters connections within the Yale community and abroad, while further strengthening Yale’s position as a leading global university that is inspiring the minds that inspire the world.

Nadira Abdilahi is from Hargeisa, Somaliland, and studied Economics at Yale College with a focus on developmental economics in East Africa. She currently serves as the Woodbridge Fellow for the Office of International Affairs to support Yale’s African Initiative to develop strategic partnerships between Yale and African centers of academic excellence. At Yale, she was heavily involved in the Yale African Student Association and the Office of International Student and Scholars. She was part of Yale’s only African dance group (Dzana), worked as a research assistant at the economics department, and was an Outreach Ordinator for the Fellowship Office at Yale. After college, she plans to go to graduate school and focus on public policy. She intends to join organizations that address global health and wealth inequality. She hopes to address and hopefully find solutions to the economic problems faced by many countries in East Africa such as extremely high unemployment rates, especially for women.

Nathan takes the lead in managing relationships with multilateral organizations, works with faculty on strategic partnerships, and facilitates the collection of partnership data. Prior to joining Yale, Nathan managed international partnerships for Global Affairs at the University of California, Davis. At UC Davis, he also launched and managed the Faculty and Staff Ambassadors and the Curriculum Enhancement through Global Learning programs. His previous experience includes directing programs in Southeast Asia for Volunteers in Asia and co-directing education programming for international graduate students at the East-West Center. He received his MA from the University of Hawai‘i in Southeast Asian studies and his BA from Wesleyan University in the Science in Society Program.

Don has overall responsibility for OIA, providing administrative support for the international activities of the schools, programs, and individual faculty across the university. These efforts focus on supporting the development of new projects with partner universities, particularly to expedite the contributions of other Yale offices during the start-up phase and during troubleshooting, managing visits to Yale by university delegations and other dignitaries, and safeguarding Yale’s reputation around the world. He also leads the university’s emergency response in the event of a medical emergency, natural disaster, or civil unrest that happens abroad. Prior to his appointment at Yale in 2000, Don served in a number of capacities at Connecticut College from 1991 to 2000 including Vice President for Community and Public Affairs, Secretary of the College, and Acting Vice President for Development. He worked for former U.S. Representative Bruce A. Morrison of New Haven from 1985 to 1991.

Pareena’s primary responsibility is to help support Yale’s South Asia initiative and undertake other duties as assigned. Prior to joining Yale, Pareena held several academic leadership roles. Pareena received her M.A. in economics from the Delhi School of Economics, and an M.S. and Ph.D. in economics from Purdue University. She started her academic career at the University of Minnesota Morris, a public liberal arts college, and served at the institution as a tenured faculty member in economics and an academic administrator for 17 years. An international development economist by training, her disciplinary research explores the intersections of gender, families, the economy and politics, particularly issues of household decision-making, dowry, and political participation. More recently her research and writing have focused on higher education issues. Pareena has served on several national boards, including the American Conference of Academic Deans and Council of Independent Colleges, Chief Academic Officer Board. She is currently also a Senior Fellow at the Association of American Colleges & Universities.

Sheila is responsible for planning, implementing, and managing communications for OIA across campus and globally. She leads strategies for effectively strengthening Yale’s reputation in key areas, and for magnifying the impact of work by Yale faculty and students.  Previously, Sheila spent nine years in the private and public sectors, most recently as communications director for the Town of Woodbridge, Connecticut. From 2004 through 2010, she worked in public affairs and international affairs for the Yale School of Nursing, as well as communications roles at the School of Medicine and School of Public Health. Before 2004, Sheila served in the United Nations' Department of Public Information, Africa Section, at UN Headquarters in New York. She holds a Bachelor of Fine Arts degree in Media Arts/Advertising from the School of Visual Arts in New York City.

Director of Programs and Institutional Partnerships for Latin America and Europe

Asia has a joint appointment with the Office of International Affairs and the Yale MacMillan Center for International and Area Studies. She is responsible for overseeing initiatives and partnerships related to Latin America and Europe. As the director of programs for the Councils on Latin American & Iberian Studies and European Studies at the Yale MacMillan Center, Asia also works closely with faculty, students, and visiting scholars. Prior to her current roles, Asia focused on board relations, alumni engagement, and international fundraising initiatives, including the Yale Center Beijing, during her tenure at the Yale School of Management. Asia received her B.A. and M.A. from Wesleyan University and her Ed.D. from Northeastern University. Her doctoral research focused on networks and internationalization in higher education. At Yale, Asia is a Fellow and Advisor at Silliman College. She is currently the Regional Editor for Latin America for the Journal of Comparative and International Higher Education.

Leslie oversees the development of senior-level leadership programs and supports the work of Yale schools, centers, and faculty on key projects in Europe. Prior to joining OIA, Leslie directed outreach, media relations, and alumni affairs for the Yale World Fellows Program. Earlier in her career, she was a senior political risk analyst for Eurasia Group, a global advisory and consulting firm, and a contractor for NASA, serving as a liaison to the Russian Space Agency and other former Soviet agencies. Leslie has a Ph.D. in political science from Columbia University and an A.B. from Harvard in Russian and Soviet studies.

Pamela works with faculty across the university to promote the activities and accomplishments of Yale students and faculty to audiences in Brazil. She manages Yale’s relationships with institutions, senior officials in government, businesses, and other educational entities in Brazil. Her team at HUB55 fosters awareness of Yale through media relations, promoting Yale faculty visiting Brazil, and publicizing Brazilian delegations visiting Yale. Pamela holds a Master's of advanced management degree from Yale School of Management and a Bachelor's degree in international relations. As a serial entrepreneur, she has founded several successful companies including Hub55.com.br and CertiGov.com.br.

Fawn supports Yale’s East Asian initiatives, developing and facilitating Yale’s relationships with institutions and senior officials in government, business and higher education in the region. She is responsible for Yale presidential visits to China as well as visits to Yale by delegations from East Asia. Fawn manages large network and media relations to support Yale’s collaborations and reputation in China. Prior to her appointment in the Office of International Affairs, Fawn was a senior program officer at the Yale-China Association, where she developed and managed public, fellowship and health programs. She holds Master’s degrees in English and in Library and Information Science.