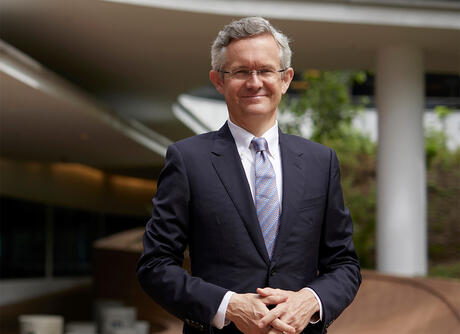 The National University of Singapore (NUS) has appointed Simon Chesterman as Dean-designate of the new NUS College, the college that will result from the merger of Yale-NUS College with NUS’s University Scholars Programme.

A recognized authority on international law, Professor Chesterman has been a faculty member at NUS Law since 2007 and has served as Dean of the Faculty of Law (NUS Law) since 2012. He will continue to serve as Dean of NUS Law while NUS convenes a global search for his successor. In assuming the role of inaugural Dean of NUS College beginning July 1, 2022, he will also be concurrently appointed Vice Provost for Educational Innovation at NUS, where he will focus on extending best practices in education — in particular, those piloted in NUS College — across the whole of NUS.

Pericles Lewis, Yale’s Vice President for Global Strategy who served as founding president of Yale-NUS College from 2012 to 2017, said, “I would like to congratulate Professor Simon Chesterman on his appointment as Dean of NUS College. As Dean of NUS Law, Simon has worked closely with faculty and students at Yale-NUS College over the past decade. He is a distinguished scholar and dedicated educator and has a broad vision for undergraduate education at NUS. Simon has played a leading role in planning for NUS College as a new institution that will build on the legacy of Yale-NUS and the University Scholars Programme. Simon will provide outstanding leadership for the new honors college.”

NUS President Professor Tan Eng Chye said, “A strong advocate for interdisciplinary education, Professor Chesterman is an inspirational and collaborative leader who has contributed much to the higher education landscape in Singapore and internationally. I am confident that under Simon’s leadership, our new NUS College will have a strong beginning.”

In August 2021, NUS announced plans to merge Yale-NUS College with NUS’s University Scholars Programme, a popular interdisciplinary initiative within NUS. As part of a larger reorganization of NUS’s academic offerings, the new undergraduate honors college will offer a broad-based, interdisciplinary education through deeper integration with the rest of NUS by bringing together the best elements of the USP and Yale-NUS College.