Professor Tan Tai Yong will be stepping down as president of Yale-NUS College after completing his full five-year term of appointment at the end of this academic year, and Professor Joanne Roberts has been appointed to serve as president of the college beginning July 1, 2022, according to the college’s governing board.

In making the announcement in Singapore, Kay Kuok, chair of the Yale-NUS governing board, said: “I wish to thank Tai Yong for his many years of dedicated service to the College. He has led the College through many challenging events, most recently during the tumultuous time of the COVID-19 pandemic. Despite the close-knit nature of residential living, the extremely low incidence of COVID-19 on campus is testament to his contingency planning and strong leadership in times of crisis.”

She added, “The entire Governing Board is delighted that Joanne has accepted this appointment. She is deeply committed to the liberal arts model of education and its broad and inclusive approach. We are confident that she will capably lead the College during the next three years, ensuring that we provide the Yale-NUS experience to all our students and making sure that Yale-NUS is supported in the transitional years ahead.” 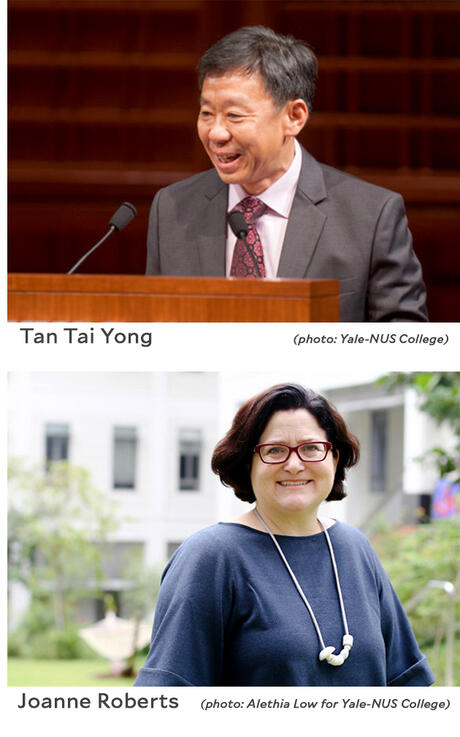 Pericles Lewis, Yale’s Vice President for Global Strategy, who served as founding president of Yale-NUS College from 2012 to 2017, said “I am personally very grateful to Tai Yong for his partnership over the past decade. Together with his wife Sylvia, he has been a central member of the Yale-NUS community from its inception. He has a deep love for the college and his service to Yale-NUS has allowed the college to thrive over the past several years.”

“I am thrilled that Joanne will lead the college for the next few years until its merger into NUS’s New College in 2025. Joanne has made the well-being of Yale-NUS students and faculty during the transition a high priority and her energy and commitment will be key to the work before us,” said Lewis.

Yale President Peter Salovey added: “It is wonderful to see the continuity in Yale-NUS leadership during this time of transition. Both Professor Tan Tai Yong and Professor Joanne Roberts have provided outstanding guidance for Yale-NUS College, and they have my gratitude.”

Of her appointment, Roberts said, “I am honored to lead this incredible community in the years ahead. Yale-NUS College has been punching above its weight despite its small stature in the past decade. Our students and graduates have demonstrated their spirit of adventure and tenacity, securing amazing jobs and fellowships after graduation, and creating positive change within their communities. Our diverse faculty and staff have also been instrumental in enabling the Yale-NUS community to be dynamic and forward-looking. I am excited to continue this good work, alongside our dedicated community members, to ensure the continued success of Yale-NUS and making sure its legacy continues beyond the end of my term. I thank President Tan Tai Yong for entrusting me with something so precious and for his many years of guidance and leadership.”

Roberts currently serves as executive vice president of academic affairs at Yale-NUS and prior to this she was the college’s dean of faculty. A Canadian citizen, Roberts previously held the Canada Research Chair in Economics at the University of Calgary. She received her undergraduate degree from the University of Waterloo and her M.A. and PhD from Queen’s University in Kingston, Ontario and held a number of leadership positions in the Economics profession in Canada before moving to Singapore. In her roles at Yale-NUS since 2017, she has been instrumental in developing new student life policies and practices and in overseeing the recruitment, tenure, and promotion of faculty over the last several years.

The National University of Singapore (NUS) announced in August it will establish a provisionally named New College that in 2025 will merge Yale-NUS College with NUS’s University Scholars Program, a popular interdisciplinary initiative within NUS. This is part of a larger reorganization of NUS’s academic offerings.

Regarding the ongoing preparations for Yale-NUS College to transition to the New College, both Tan and Roberts continue to serve on a planning committee at NUS that will guide the transition. Tan is leading the working group on faculty; Roberts is leading the working group on curriculum, which will adapt important elements of the Yale-NUS curriculum for the new college. In addition, Lewis is serving in an advisory capacity as a member of this committee.

In describing the work of the planning committee, Lewis said, “I have been pleased to see signs of considerable continuity, while recognizing that the New College will of course be very different from Yale-NUS. Together, we are working hard to ensure a smooth transition, a high quality of education during the next few years, and the continued vitality of the Yale-NUS community.”