The Yale Institute for Global Health (YIGH) in partnership with the School of Medicine, School of Public Health, and School of Nursing, hosted a talk by former Secretary of State John Kerry titled “Foreign Policy, Politics, and Global Health” on Friday, February 21, 2020.

The event featured a conversation between Secretary Kerry and Saad Omer, the Director of YIGH, which centered on efforts to raise awareness, funding, and support for global health, including the impact of climate change.

An article summarizing the event can be read at the YSPH website.

John Kerry served as the United States’ 68th Secretary of State from 2013 to 2017. From 1985 to 2013, he served as a U.S. Senator representing Massachusetts. He served in the U.S. Navy, completing two combat tours of duty in Vietnam for which he received a Silver Star, a Bronze Star with Combat V, and three Purple Hearts. He received his undergraduate degree from Yale University and his law degree from Boston College Law School.

Secretary Kerry is a distinguished fellow for global affairs at Yale University, where he is focusing on U.S. foreign policy in the 21st century. In 2017 he founded the Kerry Initiative, an interdisciplinary program that tackles pressing global challenges through teaching, research, and international dialogue. For more information, visit the Kerry Initiative website.

The February 21st event took place from 12:00 – 1:00 pm in Harkness Auditorium (333 Cedar Street, New Haven), and was free and open to the public. RSVP in advance was requested. 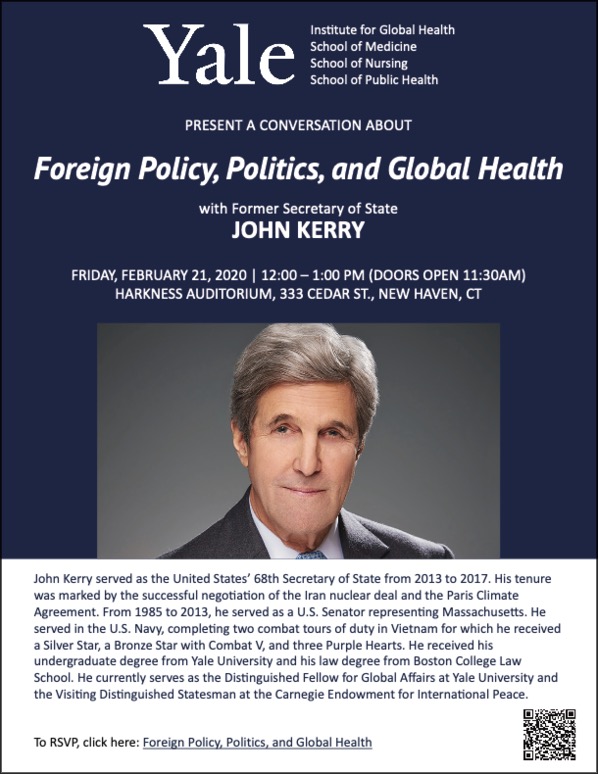