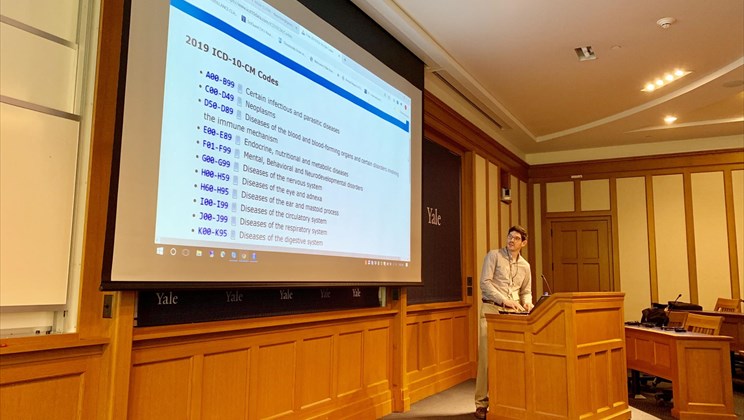 As coordinator of Ecuador’s national immunization program, Yajaira Vásquez applies only the best evidence-based practices when it comes to vaccinating Ecuador’s children and preventing disease.

So, it was no surprise perhaps that Vásquez was among the 20 representatives from 10 Latin American and Caribbean countries who came to Yale in mid-May for a series of workshops on advanced vaccine data analysis. The workshops were led by researchers at the Yale School of Public Health, who are among leading experts in the field.

“Ecuador is very interested in providing public health care based on evidence-supported research,” said Vásquez. “We plan on replicating these methods in Ecuador and to conduct further training with professionals in our country.”

The three-day conference was sponsored by the Pan American Health Organization (PAHO), which is the World Health Organization’s Regional Office for the Americas. The WHO and PAHO have been collaborating with Yale School of Public Health researchers and analysts for the past several years. The conference was funded with a grant from the Bill & Melinda Gates Foundation.

“This project is very important for PAHO countries but also from a WHO perspective as we hope the methods shared here can be applied globally,” said Tomoka Nakamura, a representative from WHO headquarters in Geneva who attended the conference.

Those who attended the workshop received hands-on training in a new statistical method that evaluates the effectiveness of vaccines using large amounts of existing administrative data, such as death records and hospitalization statistics, said Daniel Weinberger, Ph.D., associate professor in the Department of Epidemiology of Microbial Diseases at the Yale School of Public Health and one of the conference organizers.

Weinberger and his team of YSPH epidemiologists and analysts, ­especially infectious disease mathematical modeling specialist Kayoko Shioda, a Ph.D. student, created the novel statistical method using a data analysis tool originally developed by Google for website analytics. The method allows statisticians and epidemiologists to filter out unrelated factors in public health data to get a clearer picture of a vaccine’s impact.

The Yale team, along with colleagues at PAHO and local ministries of health, recently used this process to evaluate the effects of the pneumococcal conjugate vaccine (PCV) on pneumonia deaths in children under five in 10 Latin America countries. The research, which will be submitted for publication in the near future, is believed to be the first large, multi-country study looking at the effect of pneumococcal vaccine on pneumonia mortality. Pneumonia is the leading cause of death of children under the age of 5 globally. The pneumococcus bacterial pathogen is one of the primary causes of pneumonia.

“The pneumococcal conjugate vaccine is very expensive, and it is important for these countries to be able to demonstrate the vaccine’s impact on hospitalizations and deaths if they are going to support its continued use,” Weinberger said. “It is our hope that the participants in these workshops will gain new skills in data analysis that they can bring back to their countries and use in their day-to-day practice.”

Lúcia Helena de Oliveira and Cristiana Toscano, advisors from PAHO, served as conference co-leaders. De Oliveira said the countries that participated in the original study came to Yale to learn more about how Weinberger and his colleagues conducted their final analysis.

“This workshop is important because we haven’t used mortality data before in terms of determining the impact of this vaccine, so it is a very novel methodology that we are learning from Yale,” de Oliveira said.

The 10 countries represented at the conference were: Argentina, Brazil, Colombia, Dominican Republic, Ecuador, Guyana, Honduras, Mexico, Nicaragua and Peru. Other attendees included Dr. Jennifer Farrar of the CDC’s National Center for Immunization and Respiratory Diseases in Atlanta; George Agogo, a field statistician with the CDC’s Office of Global Health Protection in Kenya and Vilma Gawryszewski, an adviser for health information and analysis at PAHO in Washington, D.C. Gawryszewski monitors regional mortality rates.

“We monitor 47 mortality systems in different countries, so it is very important for us to be here,” said Gawryszewski. “We want to see if we can use the information collected by countries to evaluate health problems. This is a very novel method and we need to know how it works so we can replicate it.” 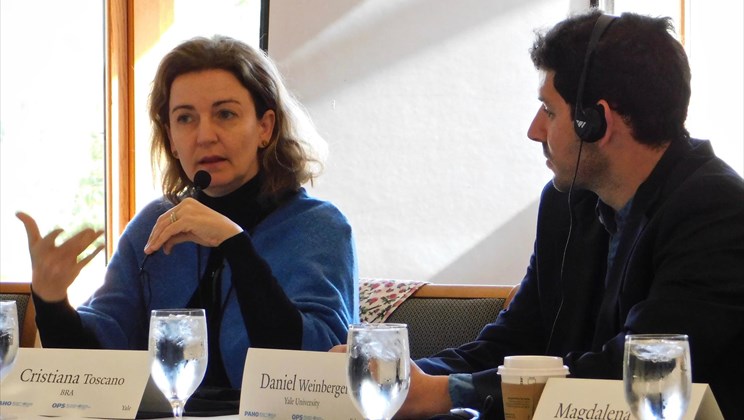 Christiana Toscano from the Pan American Health Organization outlines the goals of the conference to the gathering. (Photo credit: Colin Poitras).