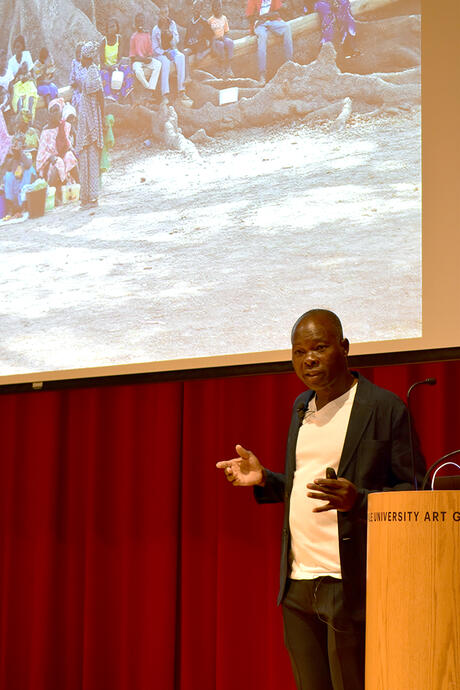 Francis Kéré, the Louis I. Kahn Visiting Professor of Architectural Design at the Yale School of Architecture, is the 2022 laureate of the Pritzker Architecture Prize, an award that is regarded internationally as architecture’s highest honor. Born in Gando, Burkina Faso, Francis Kéré is the first African to ever receive this accolade in the 43-year history of the prize.

Kéré delivered a lecture on August 25, 2022 in the Robert L. McNeil, Jr. Lecture Hall at the Yale University Art Gallery, in which he discussed his recent architectural works and his approach to design. The internationally acclaimed architect rose to visibility at the start of his career after being awarded the Aga Khan Award for Architecture in 2004 for his first building design.

Kéré proposes a vision for architecture that embraces local materials, responds to the climate crisis, and works with the realities of a community to create sustainable designs. Examples of his work that reflect this approach include a primary school in Gando, Burkina Faso, which he designed as a facility that would combat extreme heat and poor lighting conditions. He used indigenous clay combined with cement to form bricks that act as a climate buffer to create a thermal delay in the flow of heat from the outside to the inside, absorbing heat during the day and releasing it overnight. Once built, the facility retained cooler air inside and hot air was ventilated without the use of electrical devices.

His design for Benin’s national assembly was inspired by the African palaver tree and the West African tradition of meeting under a tree to make consensual decisions in the interest of a community. He described the project as embodying the values of community gathering, democracy, and links to the cultural identity of African citizens.

Kéré noted the advantage of working with local materials and traditional constructive methods because they are inexpensive, easily accessible, and environmentally sustainable. They also stimulate the local economy, as Kéré emphasized during his lecture, “These projects are job engines and involve skills that are easy to teach,” thereby empowering entire communities.

As one of the most imaginative contemporary architects of our time Kéré earned the recognition of Time Magazine’s 100 most influential people of 2022. Some of his most prominent projects are the Léo Surgical Clinic & Health Centre (2014), the Lycée Schorge Secondary School (2016), and Xylem (2019), a community pavilion for the Tippet Rise Art Center. Alongside his time as a visiting professor at universities including Yale and Harvard, Kéré has also participated in solo and group exhibitions at the Venice Biennale of Architecture, the Museo ICO in Madrid, the Architektur museum in Munich, and the Philadelphia Museum of Art.

Click the image below to watch the video recording of the lecture.

Learn more by visiting the Yale School of Architecture website.