Yale Professor Vasilis Vasiliou and Associate Vice President for Global Strategy at Yale, Donald Filer, attended the 2022 Pharos Summit held in Athens, Greece early last month. The Summit was organized by Greece’s Ministry of Education and Religious Affairs and the Institute of International Education to facilitate increased engagement between Greek and U.S. higher education institutions. The event was attended by officials and professors from 30 U.S colleges and universities and 24 Greek public universities as well as other crucial stakeholders.

Greek Prime Minister Kyriakos Mitsotakis opened the 5-day conference, addressing the importance and potential to enhance academic ties between Greece and the U.S. In his remarks, he said “[our government] has an obligation to offer our students the best possible education… in order to do that, we need to be able to collaborate with the best.” 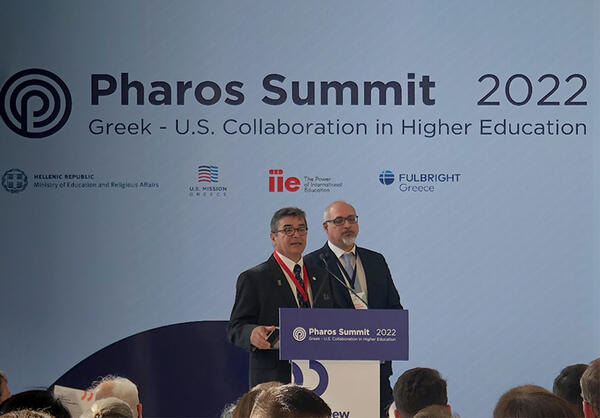 During the summit, professor Vasiliou (pictured, above) was given the opportunity to highlight Yale’s recent partnership with National Kapodistrian University of Athens (NKUA). The collaboration targets the development of a center for environmental sciences and public health and in particular, focuses on improving research efforts and preparation tactics in alleviating global health threats. Students in research groups from both universities will collaborate to identify new approaches to understanding the effects of global health issues on humans.

In addition, speakers from other academic institutions spoke on their collaborative interests at the summit. “Yale’s participation at the Pharos Summit is an example of our global partnerships helping to spark interest in further collaborations”, stated Donald Filer (pictured, below).

During the Yale delegation’s visit, they also participated in a reception at the Presidential Mansion (pictured below, left to right: Yale’s Donald Filer, minister of education and religious affairs Niki Kerameus, President of the Hellenic Republic Katerina Sakellaropoulou, and Yale professor Vasilis Vasiliou). 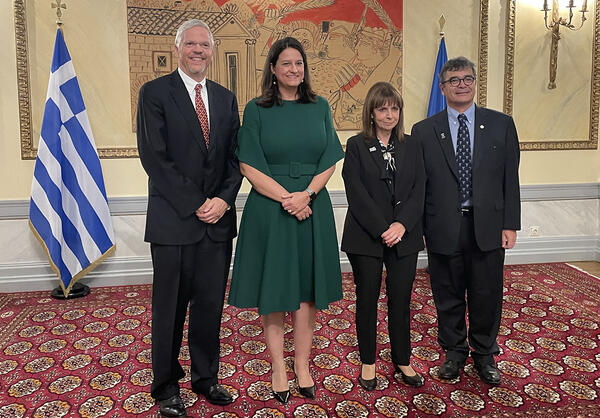 Learn more about the Yale-NKUA Partnership.