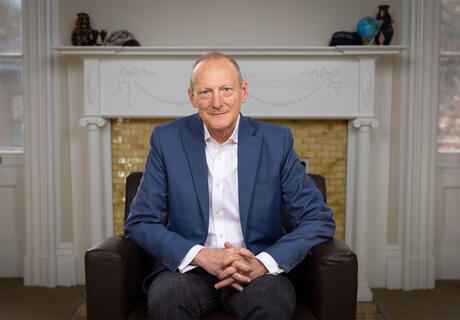 President Peter Salovey announced Jan. 18 that the Yale Jackson School of Global Affairs will open in the fall of 2022, and he named James A. Levinsohn, distinguished economist and educator, as inaugural dean.

Levinsohn, the Charles W. Goodyear Professor in Global Affairs, is the founding director of the Yale Jackson Institute for Global Affairs. In 2019, the Yale Board of Trustees approved plans to expand the institute into a professional school that will train and equip a new generation of leaders to devise thoughtful, evidence-based solutions for challenging global problems.

Levinsohn, a renowned scholar of international economics, industrial organization, economic development, and applied econometrics, came to Yale in 2010 to lead the Jackson Institute, which had been established the previous April through a transformational gift from John W. Jackson ’67 B.A. and Susan G. Jackson.

“Jim has assembled an outstanding group of faculty, senior fellows, and staff who are already offering a remarkable program,” said Pericles Lewis, vice president for global strategy. “I look forward to seeing the contributions the Yale Jackson School will make, under Jim’s leadership, to our understanding of pressing global concerns like peace and security, trade and development, and global health and climate governance.”

Read more about the Janury 18th announcement by visiting the Yale News website.

Read more about the future of the Yale Jackson School of Global Affairs.