A health care landscape without palliative and hospice care in the United States is still within living memory. Florence Wald, the fourth dean of YSN, introduced these concepts to Yale and the country in the mid-1960s.

Decades later, other nations around the world are also exploring how palliative practices can work best for their populations. For the past few years, gerontologist and associate professor Dena Schulman-Green, PhD, has been conducting research in Israel to strengthen the development of palliative care there.

“I want everyone in Israel and everywhere to have access to quality palliative care when they need it, so that’s the ultimate vision, but that means that patients and families need to know what it is and to ask for it. And clinicians need to know to offer it and how to provide it.”

Schulman-Green has spent her career seeking to improve the lives of patients with serious, chronic illnesses. The goal of palliative care is to enhance the patient’s quality of life, as well as to provide support for family members. The holistic approach of palliative care integrates psychological, social, and spiritual care through a multidisciplinary team that works as an extra layer of support in partnership with the patient’s other providers. Ideally, palliative care is integrated early in the course of a serious, life-limiting illness, along with curative care.

Working in Israel
When determining where to conduct her research, Israel made sense for several reasons. Schulman-Green realized quickly that palliative care and hospice services are not widely available, so there is room to grow. “I wanted to go see what I could do,” she said.

Despite the logistical issues of conducting research across a six-hour time shift, Schulman-Green appreciated several elements of her Israel experience. “You could really have an impact,” she said, and “make strong connections quickly.” Cold calls were often successful, and she found herself working with people who were eager to help problem-solve just because she asked.

Israel is approximately the size of New Jersey and is home to nearly 9 million people, but only 10 percent of the more than 40,000 decedents a year receive palliative care. There are just seven community-based hospices, and most hospitals do not offer any palliative care services. A few make consultations available, but most providers who fit into this category are doing so on their own time.

Many doctors and nurses in Israel are providing palliative care they have learned on the job, despite a lack of formal education in this area. Patients and families would like more options, but just like in the United States, they are not always familiar with palliative care services. “It bothers me tremendously when people need it and don’t get it,” Schulman-Green said.

Schulman-Green is hopeful because many providers offer this care despite a lack of resources. She is working to provide data to support implementation of regular palliative care education for nurses and a true integration of palliative care APRNs in Israel’s health care system.

She assembled her team with YSN talent and experts in Israel. Schulman-Green’s research partner is Yafa Haron, PhD, a former director of research in the nursing division in Israel’s Ministry of Health, who is now an associate professor at Emek Yezreel College in Tel ‘Adashim. Haron advised another team member, Eliana Aaron ’15 DNP, when Aaron was a YSN student. Aaron runs EMA Care in Israel and teaches at Shaare Zedek Medical Center in Jerusalem. Another team member, Hanna Admi, is the Interdisciplinary Research Coordinator at Rambam Health Care Campus in Haifa. Nursing students Shelli Feder ’17 PhD, APRN, ACHPN and David Collett ’17 MSN round out the group.

Israel created policy in 2009 to offer palliative care in hospitals and create the first APRN role, but it hasn’t been fully implemented. Most medical and nursing schools include end-of-life content as part of a larger topic, and clinician education tends to be sporadic. Few physicians discuss end-of-life care, and there is little data on public knowledge of and attitudes toward palliative care.

Three Years of Research
To date, Schulman-Green has approached her research in phases over three years. In the first year, the team set out to learn the existing structure of palliative care and hospice services, the status of nursing education in an APRN role, the research landscape, and the systemic, cultural, religious, and political issues at play. 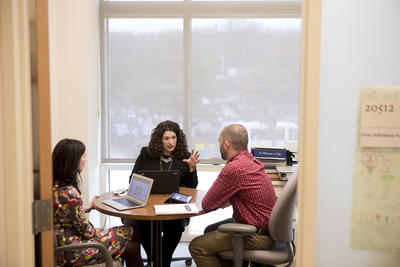 They conducted an online survey of professional caregivers and learned that 73 percent work with terminally ill patients on a weekly basis, but only 42 percent of respondents received formal palliative care training. They also examined the development of an APRN role, conducting interviews with palliative care physicians and APRNs, oncology nurses, policymakers, and deans. The results showed a low understanding of palliative care and a need for better role definition and practice authority for APRNs.

In the second year, the team identified Rambam Hospital as a research partner and organized a small palliative care conference in Jerusalem. By the end of the second year, they had made more than a dozen presentations at local, regional, and international conferences, and featured the APRN project at YSN Scholars Day. Dr. Haron also visited Yale to collaborate in person on two writing projects and meet with global health faculty. The nursing division at the Ministry of Health created a committee to work on enhancing continuing education for nurses engaged in palliative and end-of-life care.

The main goal of the third year was to vet Managing Cancer Care (MCC) with patients and family caregivers at Rambam Health Care Campus. This palliative care-focused self-management intervention had already shown it could improve symptom management, decision-making, and goal-setting among women with breast cancer. In order to use the MCC in Israel, it first needs to be translated into Hebrew and edited for cultural relevance. The team is currently conducting interviews with breast cancer patients and family caregivers to refine the MCC language.

What’s Next
Schulman-Green believes that palliative care practices are a model for how all health care should be provided, not just during serious illness: patient-centered, caring for the patient and family as a unit, and matching a health care plan to a patient’s priorities.

Looking ahead, Schulman-Green hopes to see APRNs become fully empowered in practice and not just on paper. She also plans to pilot test MCC at the HaEmek Hospital in Afula, a particularly culturally diverse hospital in the north of Israel. Expansion into Ethiopia is also a possibility.

“It’s a tremendous learning experience for me and for the students on the team to see how palliative care is evolving in light of differences and similarities in the evolution of palliative care in the United States,” Schulman-Green said. “What’s been most satisfying is partnering with nurses and other clinicians in Israel in a common effort to improve the experience of serious illness for everyone in Israel—Jews, Arabs, Christians, Bedouins, Druze—and adults and children.”