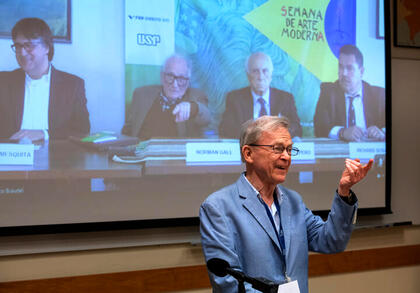 Scholars from around the world gathered to reflect on the road ahead for Brazil on September 23-24, 2022 at the Brazil 100/200 conference, organized by Yale professors Kenneth David Jackson and Stuart Schwartz. The event commemorated the centenary of São Paulo’s Week of Modern Art and the bicentennial of Brazil’s Independence, and was the first to virtually connect São Paulo to Yale.

In February 1922, a group of modernist artists, writers, and musicians displayed artwork, read proclamations, recited poetry, and performed compositions by Heitor Villa-Lobos in São Paulo’s Municipal Theater. The Week, as it became known, marked the formal beginning of the modernist movement in Brazil. That September, Brazil celebrated the centenary of Independence with the Universal Exposition in Rio de Janeiro featuring pavilions for thousands of exhibitors.

Stuart Schwartz, the George Burton Adams Professor of History at Yale, said in his opening remarks that the conference was organized “not simply as a commemoration of those events, nor as an acknowledgment of their political and cultural importance, but also in recognition that at this moment, in the midst of the 21st century, Brazilians are once again faced with the same questions [that Brazil has faced throughout its history]: what is the real Brazil and what should be national trajectory?”

Kenneth David Jackson, professor of Portuguese and Brazilian literature at Yale and director of undergraduate studies for Portuguese, writes in his latest book Cannibal Angels that the Brazilian modernists were aiming to “transform the historical transatlantic dynamic into international recognition of a Brazilian aesthetic in the arts,” forging new, original theories and identities that both challenged and assimilated their European teachings.

At the Yale conference, fifteen leading scholars from Brazil, Europe, and the U.S. debated about Brazil’s next 100 years, the definition of modernism and national culture, the meanings of independence at age 200, and the legacy of the literary movement known as Antropofagia (literally “cannibalism”). Brazil’s elections, which took place on October 2, served as the backdrop for debates on the country’s legacy and future direction.

The conference continued a series of “The Road Ahead” events highlighting Yale’s long-standing relationship with Brazil, and was the first to link the Braudel Institute in São Paulo to Yale by live stream. Ambassador Rubens Ricupero, former ambassador to the U.S., delivered the keynote opening address in English, followed by a reception sponsored by the Yale Club of São Paulo.

The conference was co-hosted by the Kempf Fund at the MacMillan Center, Yale’s Council on Latin American and Iberian Studies, the Office of International Affairs at Yale, the Fernand Braudel Institute in São Paulo, the University of São Paulo, and the Fundação Getulio Vargas in Rio de Janeiro.

Yale has a longstanding and rich relationship with Brazil. Some of Yale’s first international students in the 1830s came from Brazil, and Yale continues to be a top university recruiting Brazilian students and scholars.

Kenneth David Jackson noted, “Brazil 100/200 is part of the Yale-Brazil initiative and continues the long history between Brazil and Yale University sustained by studies of language, literature, and culture.” Yale’s ties with Brazil include the celebrated lectures by Ambassador Joaquim Nabuco in 1908 that Yale commemorated in 2008.

Today, Yale partners with Brazilian scholars and institutions in areas ranging from forestry to physics to public health. Over 100 faculty and researchers at Yale whose work relates to Brazil, including that of epidemiologist Albert Ko, the Raj and Indra Nooyi professor of public health at Yale School of Public Health, and a collaborating researcher at the Oswaldo Cruz Foundation, Brazilian Ministry of Health. Dr. Ko coordinates a research program in Brazil, which focuses on delineating the role of social marginalization, urban ecology, and climate in the emergence of infectious disease threats in slum communities and informal settlements.

With support from Yale, Inciativa Proxima seeks to provide young Brazilians with world-class training and create an environment that fosters scientific discussions and high-quality science in Brazil. Among its programs, the initiativecreated a formal mentoring program – the Yale-Proxima Mentoring Program – to support Brazilian students in developing the necessary skills to pursue a career in biological and biomedical sciences. Marcelo Dietrich, Associate Professor of Comparative Medicine and Neuroscience at Yale School of Medicine, founded and directs the initiative.

Another unique collaboration in the medical field is between Yale’s Program for Recovery and Community Health(PRCH) at Yale School of Medicine and Pesquisadores Universitários Brasileiros (PUB), which promotes research conducted by Brazilian professors, graduate students, and undergraduate students. The organization’s goal is to build a collaboration between diverse areas of studies to improve scientific knowledge in the United States and Brazil.

Yale plans to strengthen its connections to Brazil in the coming years. It will support the recruitment of scholars and prospective students to Yale from Brazil, support Yale faculty with their collaborations with Brazilian institutions, and strengthen its partnerships with key institutions in Brazil. The university will also continue its efforts to increase community for our Brazilian students, faculty, and scholars on campus, and deepen its engagement and partnership with its alumni community in Brazil.

Click the image below to view a video recording of the conference:

To learn more about Yale’s partnerships in Brazil, vist the Yale and the World website at: Brazil.Yale.edu

Visit the MacMillan website for details of the agenda, speakers and musicians who performed and to see more photos of the event.