Yale Law School (YLS) offers experiences of exchange with universities in Argentina, Brazil, and Chile. Among these opportunities, the Linkage program offers distinctive features that allow students to gain exposure to legal systems of other countries, including international moot court competitions, clinical programs, and support for independent research.

Every summer, around a dozen YLS students are selected to participate in the Linkage program to visit Argentine, Brazilian, and Chilean law schools for a period of three to four weeks. Small cohorts of two to six go to each country, where they observe classes at the partner schools and discuss what they see in them and in the country. The discussions occur not only with the faculty and university administrators, but also with judges – often from the highest courts – government officials, and lawyers in both private and public practice. The roots of the exchange, which began during these countries’ transition to democracy in the 1980s, give the program a human rights emphasis.  The small number of participants allows for tailoring of the program to the students’ interests. 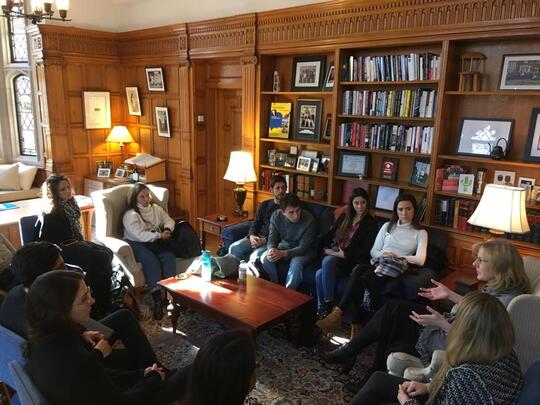 As the second component of the exchange, YLS hosts approximately a dozen students from these three countries who visit the Yale campus at the beginning of each spring term. The opportunity to attend classes at YLS and Yale University, meet with professors and student leaders individually, and give presentations about issues in their home countries provides the South American students an unparalleled opportunity to experience top-tier U.S. legal education in a short, intense period. Examples of events during the last visit of the exchange students include panel discussions on the Chilean protests and the 2019 Argentine presidential elections.

YLS professors Cristina Rodríguez, Claire Priest, Daniel Markovits, and Owen Fiss co-direct the Linkage program. Professor Fiss explained the importance of this program for YLS by stressing the unique opportunity it represents for students to learn about different legal cultures. “Linkage is based on the hope of developing close relationships among young professionals. These relationships give them a better understanding of their respective legal studies and about new and innovative ways to teach law. Building personal relationships will also enrich their professional careers,” he said.

Professor Priest has a particular attachment to the Linkage program, as she participated in it when she was studying law at Yale. She praised the “first-hand exposure to the legal and judicial systems” that the program affords the participants, who “are immediately immersed in expanding their understanding of a new legal culture.” In addition to this valuable knowledge, the program provides a distinct opportunity to develop professional relationships with future lawyers from other countries. She explained, “Linkage has built a remarkable network of alumni that grows deeper with each graduating class. The older alumni further enrich the program as they gain legal experience and mentor the current students. The program is tremendously enriching for Yale students and its success is a testament to the vision of its founders, professors Owen Fiss and Bo Burt, and the inspiration of the Latin American democracy movements of the 1980s.”

In describing the goal of the program, Professor Markovits focused on the relationship between theory and practice. “The regulative ideal that governs Linkage is always to focus on the work—on legal ideas and the practice of law. The deep personal and institutional connections that the program has forged over the decades all come from this single tap-root. As Sidgwick once observed, to gain pleasure from art one must value art not for pleasure’s but for art’s sake.  The same holds for academic exchanges—meaningful relationships grow out of a shared pursuit of ideas valued for themselves,” he said.

The Linkage program is administered at YLS by Bradley Hayes. He explained that the law students from Yale who participate in the program stay at the homes of the local Linkage participants unaccompanied by a supervisor. Living with local students gives the students a much larger window of experience in the foreign country. The lack of a chaperone means the participants must play a much more active role in programming. This helps to tailor the experience to the particular interests of each participant. “This, together with the small size of the program, is probably the most salient aspect that distinguishes Linkage from traditional exchange initiatives,” he said.

Hayes, who has lived in Ireland, Spain, Switzerland and Brazil, said that building bridges between different cultures is something that has always attracted him. “The part of Linkage that I consider most important for me personally is the visit of the South American students to Yale. They are the people who normally welcome Yale participants into their homes and we also depend on them to set up many of the activities for the Yale students who visit their country. The best way to stimulate them, I find, is organizing a program at Yale that they will remember for the rest of their lives,” he said.

Student collaboration on projects or initiatives at Yale and the South American partner universities is another element that enriches the experience of the program participants. By way of an example, Hayes said that students from Yale and the partner schools have collaborated in translating important works and journal articles, in large-scale empirical research projects, and organizing faculty visits. Following a series of lectures that professor Susan Rose-Ackerman gave in Brazil, “we were able to organize a series of events at Yale with one of the main prosecutors in Operation Car Wash, Deltan Dallagnol,” Hayes said.

Another example of collaboration Hayes mentioned is Miguel de Figueiredo, currently a law professor at the University of Connecticut, who carried out sophisticated research on the effect of perceived corruption in the 2008 São Paulo Legislative Assembly elections.

The success of the Linkage exchange is also reflected in the interest it sparks in the South American students to deepen their knowledge of American law by pursuing graduate studies at Yale.  Emilia Jocelyn-Holt and Sebastian Guidi are two current J.S.D. candidates who first came to Yale for the exchange in 2013 and 2016, and Hayes estimates that ten to twenty other South American students preceded them. “Every year I ask the students what their favorite part of the Yale program was, and every year at least one person says it was meeting with the Director of Graduate Studies who knows how to explain much better than me the uniqueness of legal education at Yale and its admission process,” Hayes said.

The origins of the Linkage Program date back to the 1980s when YLS professors Fiss and Burt forged close relationships with the scholars and lawyers leading the transitions to democracy in Argentina and Chile. These relationships formed the core of the Seminar in Latin America on Constitutional and Political Theory (SELA), an annual meeting of academics dedicated to democratic values that has become an intellectual center of gravity in Latin America.

Like SELA, in the beginning the Linkage program included only Argentina and Chile. Brazil was incorporated after Calixto Salomão Filho came to YLS to study under the supervision of professor George Priest. Now a senior member of the faculty at the University of São Paulo, “Calixto impressed professors Fiss and Burt during his stay in New Haven to the point that they agreed to his repeated requests to allow USP to join the exchange,” Hayes summarized. Similarly, the State University of Rio de Janeiro (UERJ) joined the program after UERJ law professor Gustavo Binenbojm finished his LL.M. at YLS. More recently, FGV-Rio and FGV-SP have also become part of the program.

Regarding the program’s future in Brazil, Hayes is confident that the interest in it will continue to grow. “We have been looking for ways to make Linkage more accessible to qualified students who do not have the means to participate in traditional exchange programs,” he noted. “By facilitating relationships between groups pursuing common goals, whether the Black Law Students Association at Yale and organizations in Brazil dedicated to racial integration and equality, or the research group at the USP campus in Ribeirão Preto devoted to women’s rights and leading feminist scholars at Yale, or even the creation of a community for Latin American law librarians where none existed before, we further the humanistic mission of the university and the democratic aspiration of law as justice,” he said.