Scientists from renowned institutions are in Porto Alegre, Brazil to encourage students to think globally about their current and future research.

Young talents of science gathered December 9 in the auditorium of the Iberê Camargo Foundation to learn from international researchers. But the 100 or so scientists, both undergraduate and graduate, were not just there to listen: they also wanted to know how to be “recruited” to some of the best universities in the world. 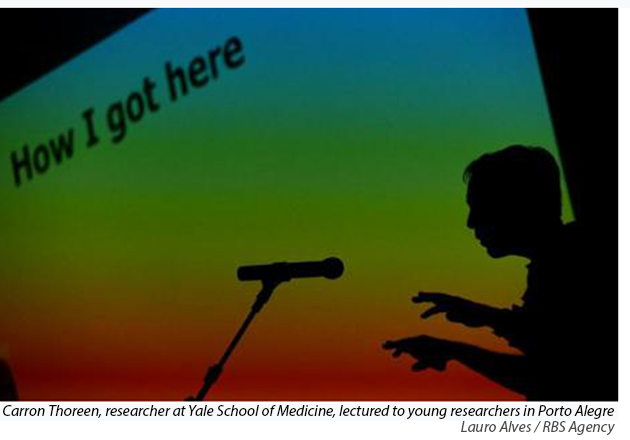 The initiative united the Higher Education Personnel Improvement Coordination (CAPES), one of Brazil’s largest Higher Education sponsors, and Yale University in the United States, a constant presence in the international rankings of institutions with the best reputation and relevant academic production for research in the most diverse areas. Also present were members of other US institutions, such as Duke University and Rockfeller University, and European academic powers such as Helmholtz Diabetes Center and University of Manchester, as well as scientists and students from the University of São Paulo (USP) and the Federal University of Rio Grande do Sul (UFRGS).

“In Brazil, we have a clear idea that where there are boys playing ball, there will be someone watching. Where there are potential models parading, there will be scouts. If there is this kind of recruitment in football and fashion, why not do the same in science?” proposed Marcelo Dietrich, professor of comparative medicine and neuroscience at Yale University School of Medicine.

Dietrich is himself a Brazilian who lived with the lack of resources for the development of science in Brazil and managed to move to another reality, accessing the world of international research. The purpose of the event, which continues through December 11 in Porto Alegre, is precisely to bring young researchers closer to international science.

The global character of the event was clear from the moment of accreditation: the language spoken by almost everyone, Brazilian or foreign, from lectures to coffee break, was English. This allowed guests like Carron Thoreen, a researcher at the Yale School of Medicine in Connecticut, to feel comfortable.

“I’m terrible at football, and I wouldn’t be a good model. So my chance was to be discovered at events like this,” he explained, making the audience laugh.

The Yale-CAPES Biomedical Sciences Meeting has had six other editions and is focused especially on health. The initiative was publicized at academic events and social networks throughout the year. To participate, applicants should register and fulfill the prerequisite of being an undergraduate student with the dream of being a scientist.

Published in GaúchaZH (text is translated from Portugeese) – to view the original article, click the link: