Yale-NUS College has organized a series of collaborative webinars which will take place throughout the Spring 2021 semester focused on timely topics and featuring faculty from Yale, Yale-NUS, and National University of Singapore (NUS). The series is intended for audiences across all three campuses and beyond and will be hosted by Yale-NUS’s Dean of Faculty Office. The series builds on the success of the recent webinar “American Elections” held in October – read more about that event. 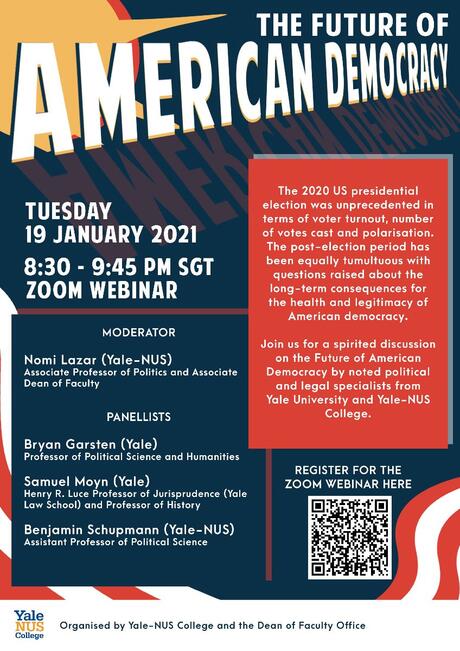 “We are delighted to feature leading scholars at Yale-NUS College along with those at Yale and NUS for engaging discourse on a diverse range of topics – from politics to public health and featuring faculty from the humanities, sciences and social sciences,” said Yale-NUS Dean of Faculty Jeannette Ickovics (also the Samuel and Liselotte Herman Professor of Behavioral and Social Sciences at the Yale School of Public Health).  “Yale-NUS welcomes the opportunity to host these virtual meetings, where we will be joined by faculty, students, alumni, and friends of our extended academic communities to explore timely ideas from perspectives of both East and West”

The first event of the new series will take place on January 19. It is titled, ‘The Future of American Democracy’ and will focus on aspects of the 2020 United States presidential election such as the unprecedented voter turnout, number of votes cast, and polarization. It will also include discussion of the post-election period which has been equally tumultuous with questions raised about the long-term consequences for the health and legitimacy of American democracy.

To register for the webinar, please visit the Yale-NUS website for details.