As Yale Police and Security teams continue to serve the university community on the front lines of the COVID19 pandemic in New Haven, the connections between the university and alumni abroad brought a much needed shipment of personal protective equipment (PPE) to support the department’s work.

Fawn Wang, Director for East Asia at the Yale Office of International Affairs, extended the university’s sincerest gratitude for this latest donation, which was organized by Yale alumnus Ty Tiefeng Hu (MPH ‘92).

Hu is the founder of Gateway Medical Innovation Center in Shanghai and Innoventures in Palo Alto, Califorinia, which focus on facilitating medical technology innovation with the aim of expediting these medtech advances to patients. He described how his connection to Yale inspired this donation, saying “I spent five years studying and working at Yale. While in New Haven, I met and married my wife who also studied at Yale, Zhiling Jiang (PhD ’96). We had our wedding at Dwight Hall on campus. Many Yale alumni in China are making efforts sending PPE, organizing scientific and medical webinars, etc. We are all concerned, and I’m very happy we are able to do something to help.”

According to Ronnell Higgins, Yale University Public Safety Director and Chief of Police, the shipment of 1,000 masks arrived April 20th at the Rose Center headquarters of Yale Public Safety, which comprises the Yale Police Department, Yale Security and services such as the ID Center. (Click to read more about Yale Public Safety.)

As the boxes were received and unpacked, Chief Higgins expressed his and his staff’s gratitude with enthusiasm, saying “We really appreciate the assist!”

This donation is another example of Yale’s partnerships in China – including faculty and student exchange as well as joint research collaborations that go back many years – providing important connections that foster collaborative efforts by groups and individuals alike. 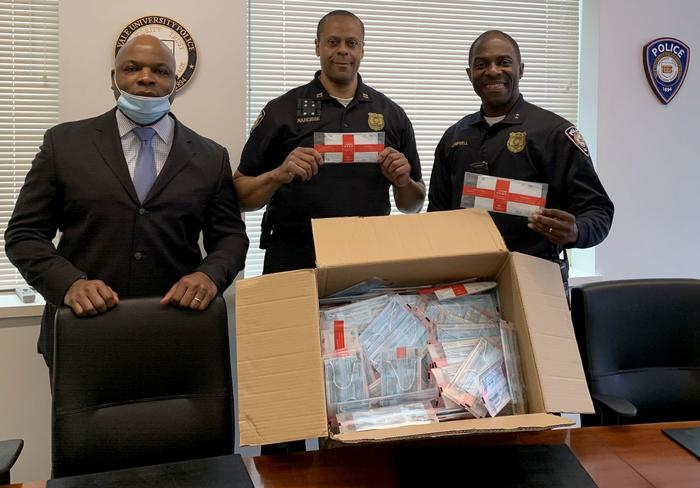 Read more about a previous donation of PPE from Yale partners in China at Shanghai Tech University.