A team of scientists from Yale-NUS College, ETH Zurich, and Yale University have discovered how leafbirds make complex color-producing crystals with highly desirable optical and electronic properties. These crystals may serve as inspiration for multifunctional applications and have the potential to make fiber optics, solar cells, and fuel cells more efficient, according to the newly published research. 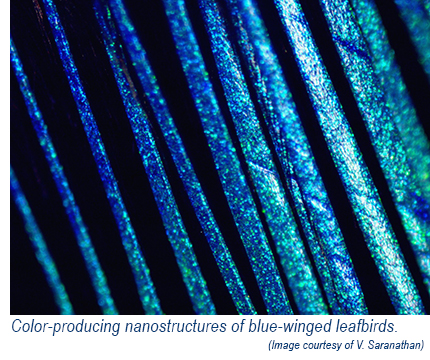 The international team of collaborators, led by Vinodkumar Saranathan from Yale-NUS College, includes Eric R. Dufresne from ETH Zurich, Richard O. Prum from Yale University, and Suresh Narayanan and Alec Sandy from the Argonne National Laboratory, a U.S. Department of Energy multidisciplinary science and engineering research center. Published in Proceedings of the National Academy of Sciences of the United States of America (PNAS), this study is particularly relevant as the search for renewable sources of energy and sustainable manufacturing has taken on a fresh urgency.

The research breakthrough came from the team’s investigation of the feather colors of leafbirds, an enigmatic group of perching birds endemic to South and Southeast Asia (including Singapore). In the plumage of one species of this bird, the blue-winged leafbird, the scientists discovered a complex, three-dimensional crystal called the single gyroid that has evolved to produce vivid, saturated structural colors.

According to Saranathan, “Knowing how leafbirds manufacture these exotic structures can spur novel biomimetic eco-friendly self-assembly strategies for large-scale materials synthesis at these highly challenging optical length-scales, given the urgent ecological need for such materials.”

By comparing the colour-producing nanostructures present in close relatives, the team reported that this species is able to directly synthesise single gyroid photonic crystals, which have highly desirable optical and electronic properties that make them ideal for use in photovoltaic cells to generate solar energy. Use of this crystal – a “crowning achievement” in material science engineering which thus far has been manufactured only with great difficulty – has the potential not only to improve photovoltaic cells, meaning they can be produced more easily and cheaply, but also for use in other industrial applications like catalysis in fuel cells and fiber optics.

Read more about this research at the Yale-NUS College website.